I get really fired up about the topic of climate change, but protests are just not my idea of fun. I don’t love big crowds, my introverted personality balks at the constant yelling and chanting... yikes.

Plus, it always seems like the noise falls on deaf ears. I find it depressing, and let’s be honest, climate change is already an incredibly depressing topic. Because despite widespread consensus among the scientific community, the likelihood of staying within a two-degrees-warmer world is looking bleak. Even though I tell myself that every small action we take to reduce our carbon footprint is a step in the right direction, the magnitude of the climate change issue often feels overwhelming.

So why do I still go to climate rallies, like the Moral Action on Climate Rally on Sept. 24 celebrating Pope Francis’ visit to the US? Because for me, however uncomfortable I feel in the midst of a protest, it’s worth it to try to keep the climate justice discussion going. 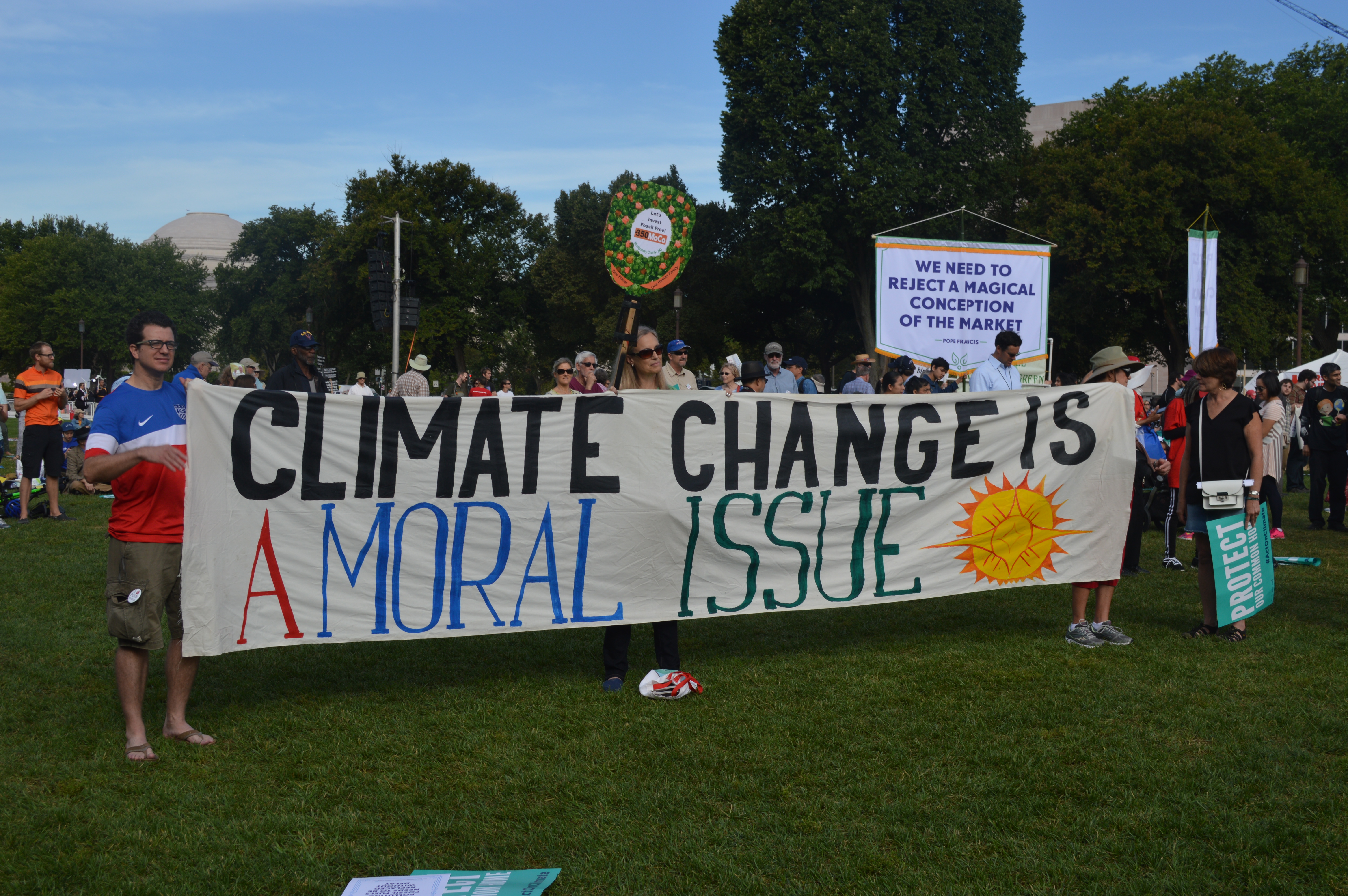 And this was no ordinary climate rally.

While I’m not Catholic, I had already been inspired by Pope Francis’ encyclical that came out earlier this year, which laid out a moral case for protecting our planet and looking out for those less fortunate than ourselves. So it was exciting to be there on the mall with other supporters of climate change action while Pope Francis spoke to Congress—not just on the “environmental deterioration caused by human activity,” but also on topics like the death penalty, immigration, poverty, and economic opportunity. The event demonstrated a papal spirit of humility and acceptance, which impressed me, even if I don't agree with Francis on a number of issues.

Of course, it isn’t likely that the most forceful climate change skeptics will change their minds just because of the pope’s stance: in fact, at least one U.S. Representative vowed to boycott the pope’s speech precisely because of his remarks on climate change. But Pope Francis’ support for environmental action and social justice may make a difference for some Catholic individuals and organizations, while continuing to encourage non-Catholics (like me) to stay involved. 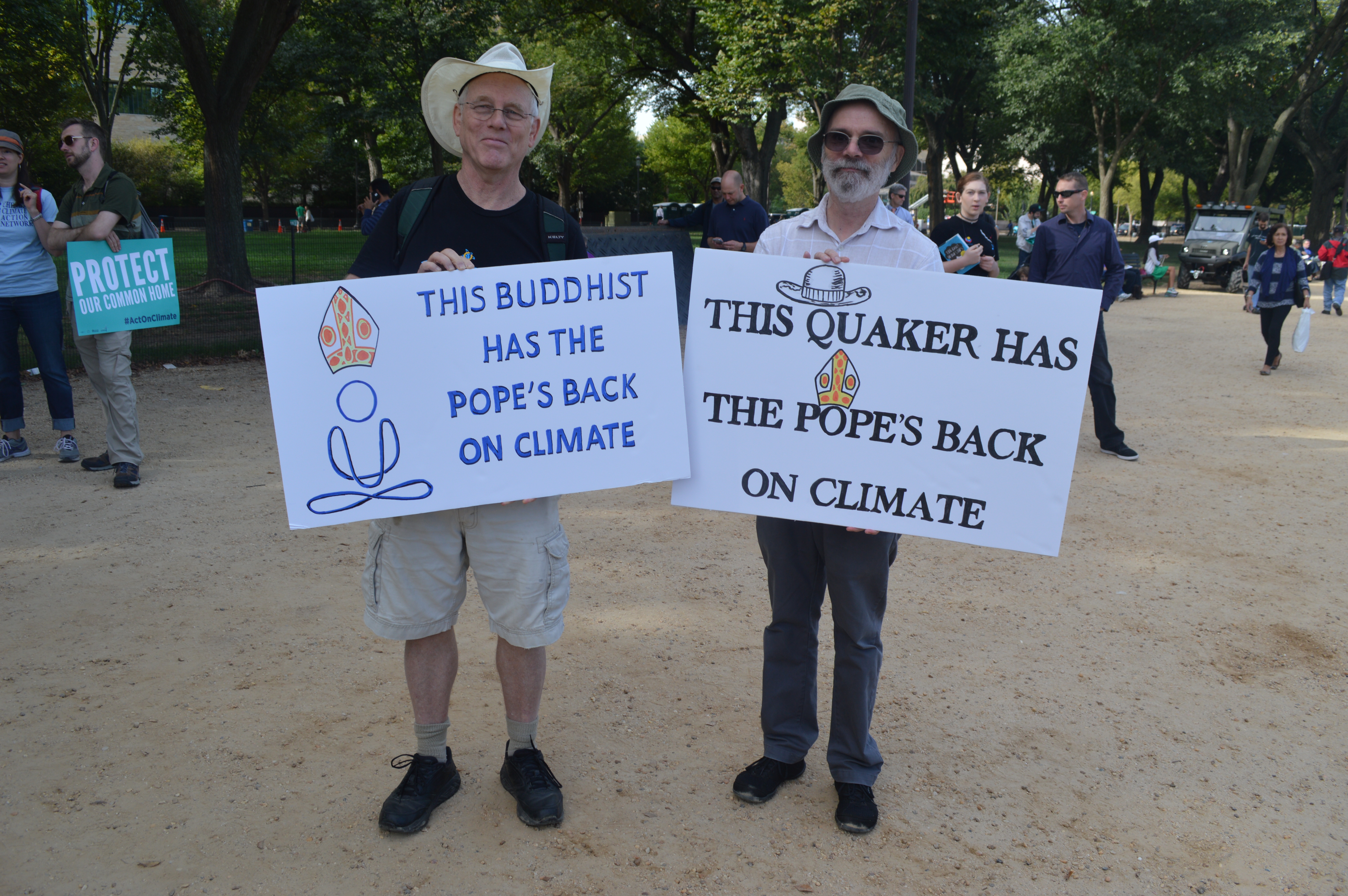 One notable sign of change is that Notre Dame University cited Pope Francis’ encyclical in its decision to stop burning coal and to cut down on its carbon footprint. And for a country like the Philippines—with a large Catholic population and a high risk of negative impacts from climate change—the pope’s message could be a game-changer at a much bigger scale, especially with the next round of United Nations climate negotiations just around the corner. Previous UN conferences have ended without any real solutions, so there’s a lot of pressure to make this one count.

And that gets back to why I attend climate rallies, despite all my misgivings: to help get media attention on an issue. In addition to the really important role that social media plays in advocacy, I’m still convinced that physically standing up for an issue counts for something. I saw at least a dozen news crews filming at the rally for the pope. Media attention isn’t success in itself, but it’s part of getting there.

And thanks to the many wonderful volunteers at the Moral Action on Climate Rally, I learned about a bunch of opportunities to get involved with local and global climate change efforts—all of which is more likely to get me out of bed and to the next climate rally. I hope you join me! (Hint: I’ll be the one not chanting.)

• Join the People’s Climate Movement National Day of Action on October 14, 2015 by finding an event near you.

Virginia:
• Volunteer in Richmond or Norfolk with the Sierra Club in support of Virginia’s Clean Power Plan, part of the EPA’s efforts to to reduce emissions from power plants.
• Find out why Virginia is experiencing the fastest sea level rise on the East Coast, and how you can support the Chesapeake Climate Action Network (CCAN) in promoting the Virginia Coastal Protection Act.

Maryland:
• Sign a petition by the Maryland Climate Coalition to renew the state’s Greenhouse Gas Reduction Act and see what organizations like CCAN are doing to keep up the momentum.

Katherine Manchester is an international development professional, with roots in Maine and Tanzania. She has written about issues of environmental sustainability and gender. For fun, she enjoys reading and messing around in sailboats.