Last week, two of my long-time British friends came for a whirlwind reunion holiday across the U.S.

Even though I’ve lived in America for seven years, I found myself re-experiencing the quirks of American culture through new eyes, from drive-thru banking (“We don’t even have to get out of the car?”) to drink sizes (“Wait, this is a small?”) to pedestrian walk signs (“Oh, the man is white, not green.”).

But for all these differences, unanimously, the most baffling was probably tipping: Should we tip more at dinner? What about lunch? Brunch? Bars? How much is enough?

For the past few years, restaurants all over the country (from high-end restaurants to pubs to coffee shops) have tried out alternative business models that do away with the traditional tipping system. And perhaps it comes at a good time, because people seem to be tipping less now than they ever have before. This, in spite of the fact that a study by the Economic Policy Institute in 2014 showed that almost 17% of restaurant workers live below the poverty line.

Here are some things you might not know about the everyday tipped worker: 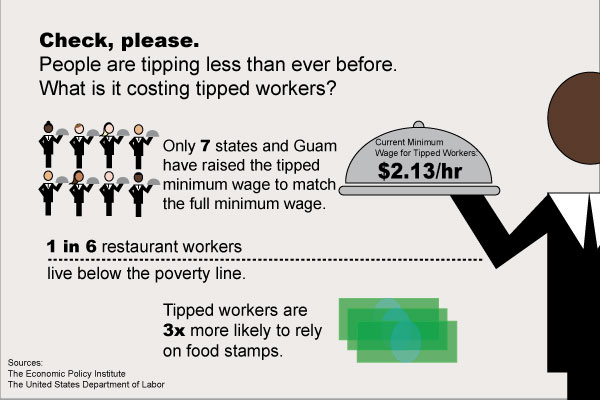 A 2011 EPI study revealed that tipped workers are more than twice as likely to fall below the $7.25 per hour federal minimum wage line, and almost three times as likely to rely on food stamps, as the average worker.

The current minimum wage for tipped workers sits at $2.13 per hour, and it hasn’t changed since 1991. Granted, employers are required to make up the difference if tips don’t reach the federal minimum, but “wage theft” isn’t uncommon in the restaurant business. In fact, EPI blogger David Cooper reports that the Department of Labor’s Wage and Hour Division’s investigation of restaurants found that of the 9000 restaurants investigated, 83.8% were in violation.

While some people can make ends meet as tipped workers, most earn low wages. The median hourly wage for a waiter/waitress (the most common occupation within the restaurant industry) is around $10 an hour, including tips—which amounts to $20,800 a year, before taxes, working full time with no vacation.

An increased tipped minimum wage might be in the future for some states, but several states have already raised their tipped minimum above the federal $2.13. Seven states and Guam have actually raised it to match the full minimum wage (California, Oregon, Washington, Nevada, Minnesota, Alaska, and Montana). Studies show no significant negative effects from these changes. A few rumbles appeared recently in the news about Seattle’s restaurant closures due to raised minimum wage, but this was debunked soon after.

While many see tipping as a way to reward good service (and sometimes to punish bad service), research shows that’s not the case. Not only is tipping an outdated European tradition, it also only reinforces some of the bigger problems in the industry such as racism, sexism, sexual harassment, and poverty.

But restaurant customers can’t fight a bad practice without support from restaurants. Smarter tipping should lead to better standards for all workers in the restaurant industry.

Here are 6 fantastic examples of restaurants who have abolished tipping, and how they’re doing things differently to protect their servers:

This meatball joint pays servers, who are all part-time, “$10 per hour or 20 percent of their individual food sales per shift, whichever is larger—almost always the 20 percent. And servers have to meet certain goals—sales and service targets, for example—to get their 20 percent,” according to The Courier-Journal.

On average, servers here make $15 per hour (plus whatever extra cash the customers leave).

This worker-owned co-op received some unwanted attention by the Department of Labor in 2012 when it was revealed that the restaurant pooled all tips and split them equally among workers according to hours worked. Why was this a problem? Because among those receiving a cut of the tips were workers not legally allowed to accept them: people like dishwashers, cooks, chefs, and janitors.

In response, Casa Nueva did away with tipping, raised food prices, and instituted an additional “revenue wage” for all employees. These days, any money left on the table is given to local charities.

Sushi Yasuda is one of the first restaurants to receive national attention for adopting a no-tipping policy. The restaurant claims they abolished tipping to follow Japanese custom.

Instead, they raised their food prices by about 15% and compensates workers with salary and benefits.

This restaurant opened just a few weeks ago, and pays all of its employees a minimum of $15 per hour (plus health insurance benefits and paid sick leave for full-time employees).

Each item on the menu is priced to account for the lack of tipping, and a standard 20% service charge is added to each bill.

Bar Marco pays their workers a $35,000 a year salary, benefits, paid vacations, reasonable work hours, and 500 shares in the company for full-time employees. The restaurant claims they will have around twenty full-time employees by the end of this year.

This cafe has gotten rid of the tip jar in lieu of a 20% raise in prices, which allows all employees to receive a base pay of $12.50.

Kopplins has also started a “Power of Change” program, giving 1% of the shop’s cash sales to local organizations.

Tip-free restaurants are on the right track in terms of employee protection, and according to CBS News last year, the no-tipping practice is on the rise in cities nationwide.

Next time you go out for a bite to eat, look up some tip-free restaurants near you. For one, I know I’ll be checking out The Public Option, a DC brewpub that—when it opens just a short drive away from my home—will opt for fair wages instead of tips. You might notice higher prices on the menu, but you probably won’t end up paying more than you would have in a restaurant with a tip.

Too often, restaurant servers are victims in a flawed industry. But it doesn’t have to be that way—and when we can get past the idea of tipping as an industry practice, we’ll help people to work in a more ethical restaurant industry. And until then: please, don’t stiff your server.

Ah-reum Han was born in South Korea and raised on the sandy savannas of West Africa. She’s been to five different continents, but learned to keep her feet still long enough to get her B.A. in Creative Writing and Cross-cultural Sociology from Carson-Newman University. She is currently a third-year M.F.A. candidate and thesis fellow in fiction at George Mason University.
Groundswell