Open Section Menu
This company made its fortune in denim. Who is it?

Shocking wardrobe confession: my mom and I both shop at Gap. According to popular belief, doesn’t that make me, or her, or both of us super lame?

Nah. Because first of all, everyone (and their mother) looks good in a classic T-shirt.

And second, because Gap is giving customers a clear example of what a large socially responsible company should look like. 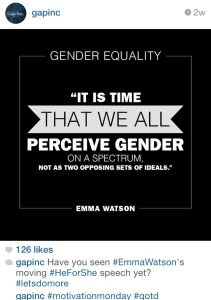 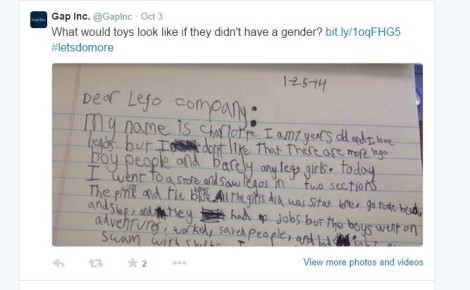 At first, I thought #letsdomore was Gap’s battle cry, its call to action—but the phrase pops up in so much I decided to google it. Turns out, Gap has an entire movement dedicated to “doing more,” by investing in local communities, empowering women, and promoting sustainability.

And with their promise to do more, we as consumers can do more, too. Gap Inc is showing us in these four ways what we should expect from all big companies:

When it comes to environmental practices, companies usually either do really well—or totally flop. Well, luckily Gap belongs to the first category. It conducts “Treasure Hunts” in its distribution centers to search for potential energy wasters—the results of the first couple hunts have led to an approximately 17% reduction in energy usage. It’s also pledged to reduce its greenhouse gas emissions by 20% between 2008 and 2015.

Plus, like Target, Nike, and REI, Gap is one of the founders of the Sustainable Apparel Coalition, a group of apparel and shoes brands trying to cut down on the social and environmental effects of the industry.

Gap has a history of volunteerism. Every store under its umbrella chooses a Community Leader, who identifies a need in the local community and works with a non-profit to solve it. Approximately 70,000 Gap Inc. employees have volunteered, which adds up to a shared 460,000 hours.

For their workers specifically, Gap Inc.’s CEO has promised to increase their storewide minimum wage to $10/hr at the beginning of 2015. Currently workers at all Gap Inc. stores make $9/hr, which is above federal minimum wage.

80% of garment workers around the world are women, but few of them ever become managers or supervisors. So Gap developed P.A.C.E. (Personal Advancement and Career Enhancement), a training program for women that teaches financial and legal literacy, decision making, problem solving, and communication.

Right now, P.A.C.E. is operating in seven countries: China, Indonesia, Vietnam, Bangladesh, Sri Lanka, India, and Cambodia. After they completed the program, more than half the participants said they had higher self-esteem.

Gap Inc. is sponsoring and running a program for at-risk youth in Boston, San Francisco, and NYC called This Way Ahead. Through the program, Gap Inc. connects young people with mentors and store employees to teach them career skills, life planning, and the importance of education. To date, 75% of the program’s graduates have been hired as permanent store associates.

There’s also Camp Old Navy, which is not your typical swimming-in-the-lake, playing-Capture-the-Flag sleepaway camp. In conjunction with the Boys & Girls Clubs of America, Gap Inc. has sent more than 70,000 kids to its camp, where they learn job interviewing skills and retail business practices.

To sum it up: not only does Gap have nice goals, but it follows through. That’s probably why Corporate Responsibility Magazine gave it the number two spot on its list of “2014 Best Corporate Citizens”.

Gap Inc.’s mission reads: “to do more than sell clothes,” which I absolutely love. Yes, a shirt is a fashion statement, but it’s also an ethical and a political one. The whole point about conscious consumerism is looking at the power of the personal dollar, and when my mom or I buy one of Gap’s tees, we’re supporting more than just a clothes company.

I’m looking to Gap as proof that big companies can do a lot of good, and hoping that other companies step up to the plate, too.

Aja Frost is a student at Cal Poly San Luis Obispo and a regular contributor to Her Campus, The Prospect, and her college newspaper. Her work has been featured on xoJane and The Huffington Post. The only thing she loves more than writing is dessert. Follow her on Twitter @ajavuu.
Groundswell