Washington, DC – An estimated 16 million Americans pay more than 10% of their total income on utility bills, more than four times higher than the average consumer, and bears our a long term trend of increasing energy cost burdens for working families, a new white paper from energy equity nonprofit Groundswell explains. The analysis also found that resources that can bring down energy bills -- such as community solar arrays and energy efficiency upgrades -- are often out of reach for working families because of financing or other barriers that can be overcome through simple policy changes and community awareness.

“There is a critical link between energy and economic security in this country. Nobody should have to choose between putting food on the table or keeping the lights on, but that’s exactly the situation millions of American families now find themselves in,” said Groundswell CEO Michelle Moore. “We need market innovation and policy transformation so that working families have equal access to affordable clean energy and efficiency options to put money back in their pockets, and help them on the path towards economic stability. Community solar, in particular, could be a game-changer, but it will take intentional public and private sector leadership to get there.”

Over the past decade alone, electricity expenditures as a proportion of low-income household budgets increased by a third, while falling for higher earners, new research by Groundswell found.  But research highlighted in the paper shows that even households with relatively high earnings still struggle with their utility bills -- seven percent of families making more than 200% of the federal poverty line, or approximately $50,00 a year for a family of four, still pay disproportionately high energy costs. 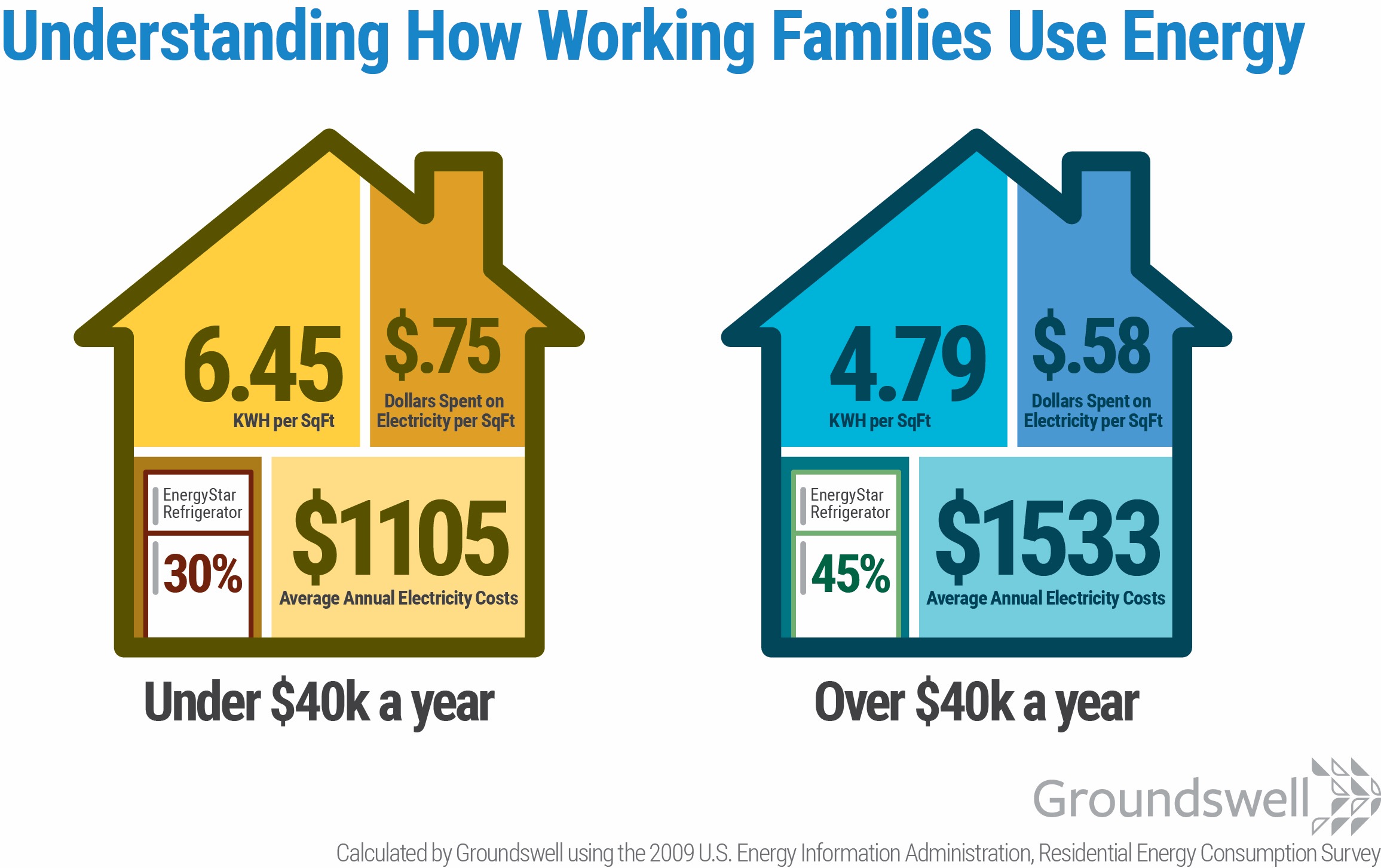 While the root causes of America’s growing energy cost inequalities are related to a wide variety of social and economic factors, the study found that low property ownership rates, lack of access to capital, and lack of awareness of existing programs are among the most addressable solutions by policy makers and advocates.

Groundswell found that the U.S. cities struggling the most with energy cost inequality are Jacksonville, Baltimore, Miami, Orlando, and Austin – where more than 10% of those living in poverty pay in excess of $200 a month on their power bills (see chart below for city rankings). However, the white paper found that problem exists nationwide. Despite advances in energy efficiency, the long-term trend towards lower electricity prices, and decreasing per capita demand for power, America’s working families are still spending more money every year on their utility bills.

Enhanced community engagement strategies and community solar programs present the strongest pathways to bringing affordable, renewable energy to low and moderate income families. In many states, rooftop solar offers a way for consumers to reduce their utility costs on a per kilowatt hour basis and to lock in long-term, stable pricing, the white paper said. Estimates cited that increased solar adoption for all moderate and low income families could collectively save these households over $17 billion annually.

Expanding access to renewable energy and efficiency benefits low and moderate income families directly by lowering their energy bills, but also has the potential to boost employment in higher paying jobs in those same communities. The paper notes that solar is one of the most job intensive energy investments in the United States, generating more than 7 new positions for every megawatt of installed panels.

In addition, aligning residential energy efficiency programs with community solar programs could amplify cost savings, putting money back in the pockets of people who are already carrying a disproportionate cost burden for electricity, the study said. Direct community engagement through place-based programs would be an essential strategy for transforming affordable clean energy and efficiency into greater economic empowerment.

“Together, these initiatives could open up new pathways for working families to climb the economic ladder and build real wealth in their communities, ensuring that working families have a seat at the increasingly abundant clean energy table and aren’t left to wait on the crumbs,” Moore said.

Groundswell builds community power. We develop community solar projects and subscriber management programs that connect solar power with economic empowerment for local communities. We believe that clean energy is a necessity, not a luxury; we’re all in this together; and we can’t afford to leave our neighbors in need behind. True to our green jobs roots, Groundswell incorporates workforce training and apprenticeship opportunities into our work through collaborative partnerships. Complementing our community solar programs, we also offer additional clean power savings with energy efficiency through partnerships.