I wish I were the kind of gal who could use menstrual cups—a nifty alternative to disposable sanitary products. They’re cost-effective and friendly to the environment.

I’ve tried them. I’ve tried to like them. And they’re not for me… at least, not right now.

So, until I can make the switch, what am I really looking at when I walk down the aisles of my local drugstore? What companies am I supporting with my period-product dollars?

Last year in America, women spent around $2.7 billion on sanitary napkins, liners, and tampons. It’s a profitable industry: just ask Hui Lin Chit, who made pads commonplace in China and who is now one of China’s up-and-coming billionaires.

Today, the big players in the disposable sanitary products business are Procter & Gamble (Tampax, Always/Whisper), followed by Kimberly-Clark (Kotex). Together these two corporations own around 64% of the market.

How do these two giants measure up, ethically?

The women’s hygiene market has traditionally been dominated by men in positions of power, so it’s not surprising that Kimberly-Clark (K-C) has only 25% women on the board compared to Procter & Gamble’s (P&G) 45.5%.

2. Breaking the stigma at home

K-C’s U by Kotex launched its Generation Know campaign in 2013 to spread awareness and openness for feminine hygiene issues and period talk.

P&G has a similar campaign, and its version—the BeingGirl website—launched way back in 2000. Girls can ask questions about their periods, their bodies, eating disorders, and safe sex practices, among others.

Menstruation is certainly taboo in America—just look at hilarious advertisements for period products, or Hollywood’s favorite euphemisms, or most recently, the Rupi Kaur Instagram controversy. But in other parts of the world, this taboo often limits a woman’s capacity to succeed.

Both K-C and P&G have partnered with local schools and communities in India, where poor menstrual hygiene accounts for an astounding 70% of all reproductive diseases.

P&G has also been cause-marketing hardcore. At P&G’s Hello Flo site, you can subscribe for monthly care packages containing period products (Always/Tampax, of course) and goodies to boot, but with a 3 or 6 month subscription, customers can also say they’ve helped provide cheap disposable pads to Kenyan women via ZanaAfrica. According to ZanaAfrica, period-shame and poverty accounts for “over 850,000 girls [missing] 6 weeks of school every year and women [missing] valuable work hours.”

It’s worth pointing out, though, that the effectiveness of providing pads to increase girls’ attendance at school appears minimal, and may prove unsustainable. Better models exist, such as Thinx Underwear’s partnership with Uganda’s AFRIpads or Femme International, both of which at least provide reusable products, rather than disposable ones.

Last year, Ethisphere ranked K-C as one of World’s Most Ethical Companies for the third year in a row. According to Ethisphere, they honor “companies that truly go beyond making statements about doing business ‘ethically’ and translate those words into action.” Apparently, K-C has improved a great deal since Greenpeace’s Kleercut campaign ten years ago, after Greenpeace exposed their unsustainable logging practices in Canada’s ancient boreal forests.

Last year, P&G received some attention for harmful deforestation practices connected to its palm oil sourcing in Indonesia. In response, P&G promised to end this by the end of 2015.

2. The Cons: Little Concern for Waste

If you consider the plastic in the packaging, the applicators, and the pads, as well as the way in which these products are manufactured, periods contribute a whole lot of waste. Estimates still say the average menstruating person produces 250-300 pounds of sanitary protection waste in a lifetime, which (realistically) collectively contributes 0.5% to our total trash production each year.

Neither of these two companies have made major strides in the “greening” of their products—and most information on the subject on their respective websites is at least 2 years old.

(Ironically, tampons have recently been used to effectively track river water pollution, according to University of Sheffield’s environmental engineers.)

So who would win in a fight: K-C or P&G? It depends on what issues you find most important—and honestly, neither company has a strong lead, when all is considered.

For me, my passion for women’s rights sometimes outweighs my passion for the environment, especially when considering the relatively small contribution my purchases make towards pollution, if I’m careful with my purchases. I know I appreciate both companies’ efforts to promote period-positivity in a way that doesn’t break my bank.

Lunapanties, Knixwear, DRC Underwear, and Thinx Underwear have been pioneering leak-proof underwear technology, which is also trying to bring the sexy back to Mother Nature’s monthly gift. But to pay $30+ for a single pair of absorbent panties? That’s an investment I won’t make right now. Not to mention that even reusable cloth pads, such as the ones on Etsy, are only good for a few years, and must be weighed against the water usage that comes with its maintenance.

Affordable middle ground options for disposables do exist, and you can find and order them online.

Although I’ll continue to use disposable pads and tampons, I also think it’s important to breach my comfort zones one at a time.

Maybe in the spirit of Menstrual Hygiene Day (coming up on May 28), I’ll go applicator-free. Or maybe I’ll buy my products in bulk, or with less packaging.

And maybe one fine day, when I’m brave (and less neurotic), I’ll take that cup on another spin. 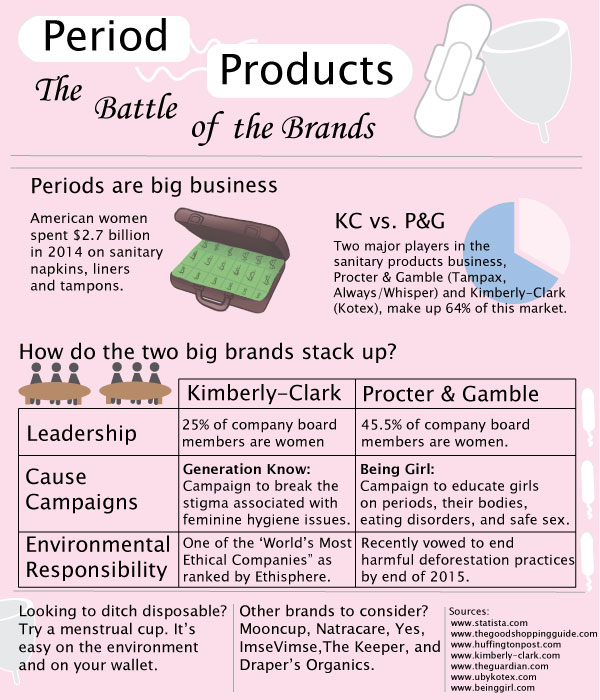 Ah-reum was born in South Korea, but bred on the sandy savannas of West Africa. She’s been to five different continents, but learned to keep her feet still long enough to get her B.A. in Creative Writing and Cross-cultural Sociology from Carson-Newman University and her M.F.A. in fiction from George Mason University.