Over the past four years, the Newark Bike Project has helped fix more than 2,000 bikes for people in need. It's also become a hub for building community—exemplified by efforts like providing safe social spaces through women's and LGBT nights and hosting organic dinners for college students.

"Transportation is pervasive across all aspects of someone's life. It's how they interact with their community, how they go to work, how they enjoy their evenings and weekends," says Jamie Magee, a co-founder of the project."By taking that multifaceted approach, that's how you really build a sustainable organization."

The Delaware nonprofit is one of approximately 200 community bike shops across the nation that have taken a holistic approach to sustainability.

From Boston's Bikes Not Bombs, which sends bicycles overseas for development projects, to Pittsburgh's Free Ride!, which makes human-powered smoothie blender made out of old bike parts (to promote recycling), bike shops do valuable work that other groups should emulate.

Community bike shops habitually tie together equity and environmental issues. Many give away free bicycles to those in need and sell donated bikes for cheap, so people who couldn't otherwise afford them can have access to reliable transportation free of fossil fuels.

The shops also often make an effort to deliberately reach out to low-income people, whether through using local social services to connect individuals to their programs or putting up posters and relying on word-of-mouth.

The Wilmington shop caters largely to disenfranchised minorities in the city's East Side. Wilburn traces back much of the neighborhood's discontent back to the 1950s, when government slum clearance policies displaced over 300,000 families, mostly of color, across the country.

The city became even more divided with the race riots of the '60s after the assassination of Martin Luther King Jr.

"It's funny to be talking about stuff that happened quite a while ago," Wilburn says. "but there really is still a legacy of that in the city."

The poverty that came out of that era in history remains. But the Urban Bike Project helps ease that situation for some. Take a man named Elvis, for instance, whom Wilburn met riding the bus a year and a half ago.

At the time, he was living at the YMCA after being released from prison. Today, he uses one the few bikes he got from the shop to deliver sandwiches for a local restaurant.

Although he doesn't really need the shop anymore, he keeps visiting. Wilburn actually calls him an "institution" at the store.

Stories like Elvis' are widespread. Shop staff speak of foster families learning to bond over the shared activity of mountain biking and of college students getting back on their feet after exhausting their budgets on tuition, all while keeping bikes out of the landfill.

"There's a lot of value to the community, in giving people effective transportation," as Magee of the Newark Bike Project says, "especially when the alternative could be the same bicycle that person is riding would've otherwise just sat in someone's garage in their house in the suburbs."

Community bike shops also take care to address other forms of inequity. Before its recent move, for instance, the Newark Bike Project hosted a women's and LGBT night once a week. The event allowed attendees to feel like they had a moment where they didn't have to worry about stereotypes.

"There's kind of a culture of patriarchy in some bike shops," Magee explains. "Many people, not just men, would make assumptions about someone's mechanical abilities and aptitudes and interests based on their gender. So by having a women's [and] LGBT night, we can remove some of that element." 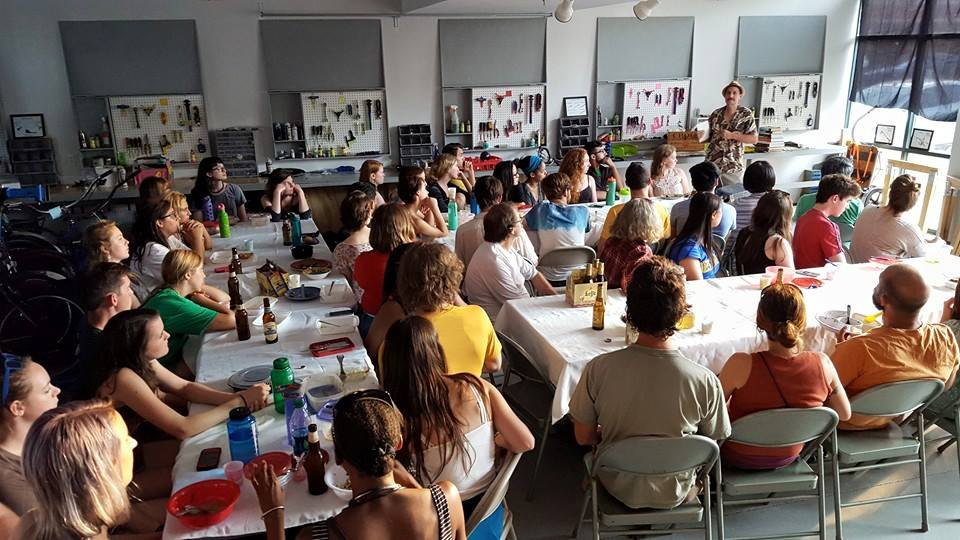 By involving a variety of community members through shop operations and public events, bike shops also get people to care more about where they live.

In the congested downtown of Newark, parking spaces are hard to find. But commuters can cut around the traffic and easily navigate around on bikes. With the shop providing the wheels and offering tools for D.I.Y. repairs, there's ample opportunity to put more cycles on the road.

"Everyone wins when it comes to cycling advocacy," Magee says. "As you get more people using bikes on the streets, those towns with progressive urban planning funds, they will take note of the increase of cycling road share, and they will add more bike lanes, add more bike friendly features, and that makes your average family, cyclist, or community prospect be more inclined to use bikes for transportation.

"Some cities in Europe have more bikes than cars... We're not at that point anywhere in the U.S. yet, but we can start to approach that. And one of the ways [we can do this] is by enabling people at all different demographics and income levels to have access to cycling."

Wilburn adds that for her, bicycles are a way of building a stronger community, particularly for Wilmington, which has a high commuter population.

"Lots and lots of people drive into the city, work and then leave it," Wilburn says. "I'd love to see Wilmington be a place that people love to spend time in again."

Bikes help riders to experience the streets differently than a car, allowing them to enjoy the people and environment around them more fully. These interactions get residents more invested in where they live and work.

In the words of Wilburn, "People won't fight for something if they don't love it."

So if you're interested in building up your community through bikes, how can you help?

Owners of vacant buildings or those about to be demolished or remodeled can consider donating the space to shops that are just starting out. Several such donations helped the Newark Bike Project, which moved a total of three times before they settled in their current location.

Volunteering is also valuable—and you don't have to be mechanically savvy. Many shops need help with tasks like publicity, legal, and accounting advice, and appreciate donations of items like computers or security systems.

If you want to start your own shop, Magee says Newark's open to help. He makes a point to talk with local shops where he travels and brings his newfound knowledge home, and has good advice about operations, community outreach, finances, and building a volunteer base.

However you choose to involve yourself, keep in mind the holistic priorities of community shops as a model for your own actions. Even at city meetings on cycling initiatives, for instance, the Urban Bike Project sends out a representative to make sure people are thinking about how to make them equally accessible.

"When you're looking at the big picture, every resident has to be accounted for," says Wilburn. "Because if you can bring everyone along with you, they're going to be that much better off." 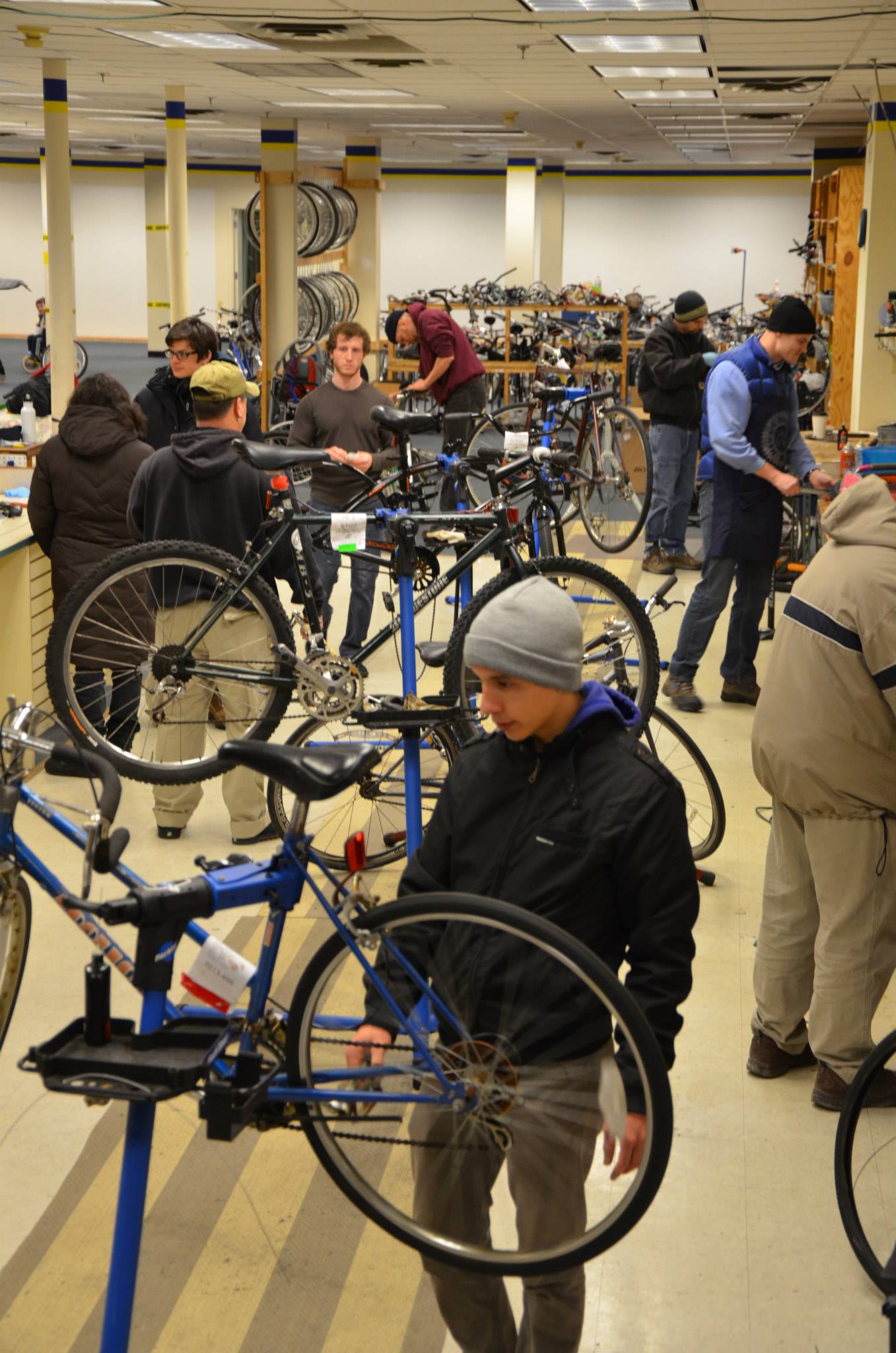 Emily Zak is a Santa Fe-based social justice writer. Her work also appears on sites like Care2 and Heart Beings. A native Idahoan, she wishes she could ski powder and play pond hockey year-round.