I’m back this month to report on energy market dynamics and new policy developments across the nation.

Also: Keep an eye out for Groundswell’s Community Power Podcast coming out soon…

Solar power has just overtaken gas and wind as the largest source of new power in the county. According to the Solar Energy Industries Association (SEIA) and GTM Research, 2.5 gigawatts (about 10 million solar panels)[1] were installed in the first three months of 2018, a 13% increase from the same time period a year ago.[2] And for the second consecutive quarter, the amount of new solar installed was greater than any other energy source in the country. This statistic is even more remarkable—and indicative of the resilience of the solar market—when you consider the new tariffs that the Trump administration has imposed on imported solar panels.  These tariffs, along with tax reform, were expected to flatten the solar industry’s growth overall in 2018.

For a different perspective on the state of the solar market, check out this piece from Reuters, which claims that utility-scale solar projects have been frozen or cancelled at more than twice the rate that new solar investments using domestic panels have been announced. This excerpt sums up the main point: “The divided impact on the solar industry underscores how protectionist trade measures almost invariably hurt one or more domestic industries for every one they shield from foreign competition.”

Another “first” for the first quarter of 2018: residential battery installations beat commercial deployments, 15.9 megawatts to 11.7 megawatts. Even more impressively, home batteries rivaled utility-scale installations, which clocked in at a mere 16 megawatts. This is notable because ever since tracking of storage deployments began in 2013, residential batteries have appeared as a blip on the industry wide bar graph—not zero, but an extremely small share of the market. Now, for the first time, the collective amount of a few kilowatts here and there has nearly overtaken the giants of grid-scale mega-projects. That's a result both of large projects having a slow quarter (it’s a “lumpy” market, with frequent bumps and dips) and small residential projects multiplying in number. The growth was driven largely by California and Hawaii, which collectively accounted for nearly three-quarters of all residential energy systems deployed. You can read more here. 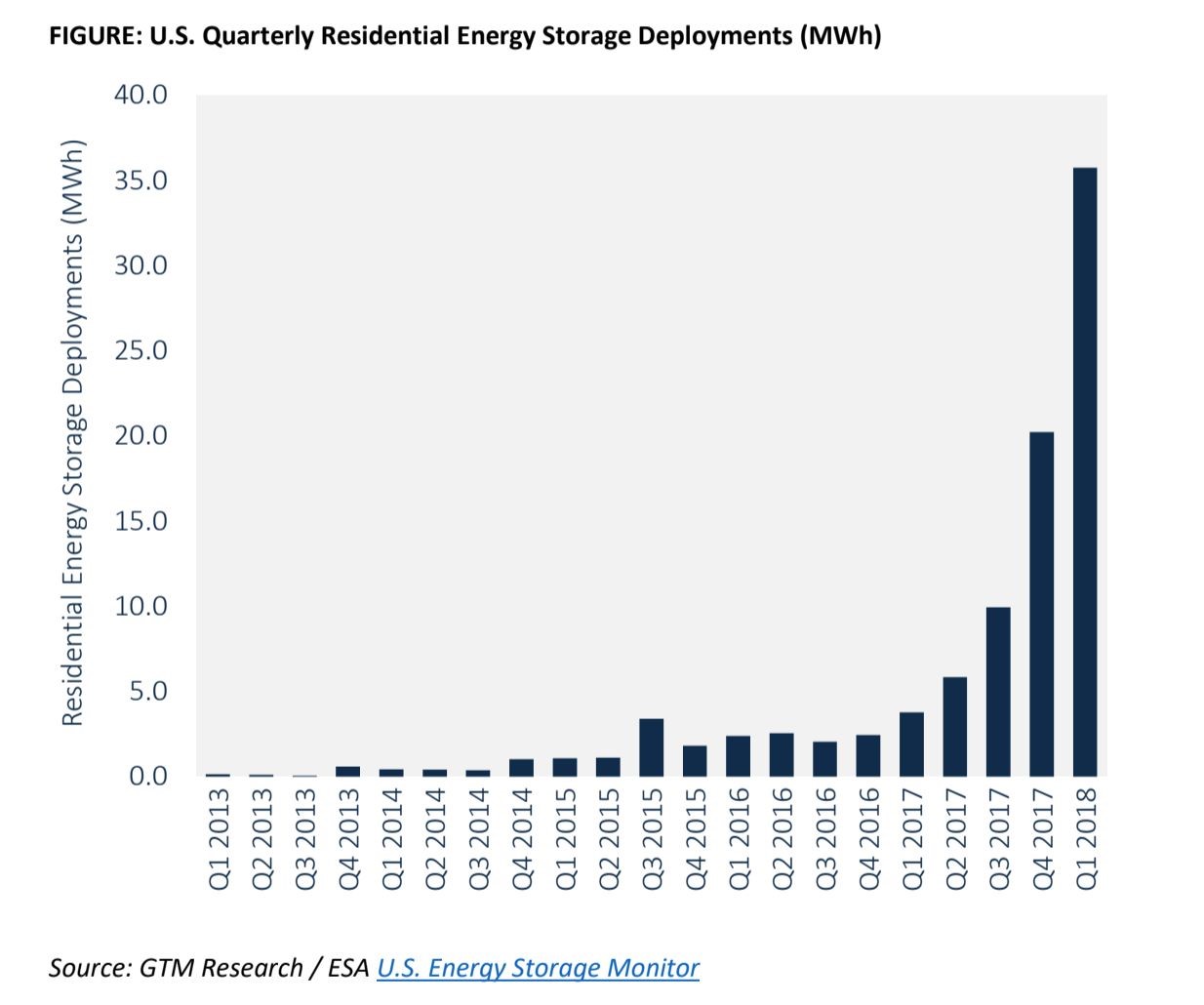 Buried deep within the latest edition of California’s state building codes were some groundbreaking new standards for new residential construction. Besides the requirement that all new homes under three stories install solar panels—a first for the nation—California’s Title 24 codes incentivize energy storage and include energy efficiency measures that should cut energy use in new homes by more than 50 percent.

Technically, community solar can count toward achieving the solar requirement. Building developers must receive approval from the California Energy Commission and coordinate with their local utility before initiating a project. Unfortunately, subscribers to community solar projects in California can’t receive net metering benefits under current state regulations. As a result, there might not be much of a cost benefit to the customer unless California’s rules change.

The standards take effect in 2020. Now that the codes have passed, the real work begins on the implementation side.

You can find the original building codes here, but I recommend Greentech Media’s helpful write-up for an abbreviated summary.

That’s all for now. I’ll be back with more next month. In the meantime, let me know if you have any comments or suggestions!

A LEED Accredited Professional with nine years of green building and sustainability consulting in the federal sector, Dave brings a strong technical grounding in clean energy issues and data analysis as he focuses on deepening the impact of Groundswell’s work. Before coming to Groundswell, Dave played a leading role in developing sustainability plans for government agencies and increasing the resilience of federal buildings to the effects of climate change. Dave also served as a Technical Reviewer for a major World Resources Institute (WRI) report on greenhouse gas emissions accounting in the U.S. public sector. Outside of the office, Dave can be found onstage with The Washington Chorus and out on the field in local recreational soccer leagues. Dave grew up in Sturbridge, Massachusetts, and is a proud alum of Middlebury College in Vermont.