Have you noticed you’re paying a higher electric bill than just a few months ago? Let me suggest some useful tips to beat the heat and save some green courtesy of the U.S. Department of Energy (DOE).  This DOE infographic will tell you everything you ever wanted to know about air conditionings to help you maintain the best efficiency and help lower your bill.

Now on to the main event:

This month, I want to focus on the state of solar jobs and the outlook for the future employment in the industry given recent volatility.

Let’s start with some data. From 2010 to 2016, the number of solar jobs in the United States nearly tripled (to more than 260,000). In 2016 alone, the solar industry grew 17 times faster than the U.S. economy. By the end of that year, there weren’t only more solar workers than coal miners; there were more people working in the solar industry than were employed by every oil, gas, and coal-burning power plant put together.[1]

In 2017, however, the industry slowed, losing 3.8 percent of its jobs—the first such decline since 2010, when these statistics started being tracked.[2] This dip was mostly due to the near-expiration of the solar investment tax credit (ITC). The ITC, which lets taxpayers erase up to 30 percent of their tax liability by installing solar power, was originally supposed to expire at the end of 2016. As the deadline neared, companies and utilities rushed to take advantage of it, building as much solar power as possible to maximize their savings. (Although the tax credit was ultimately extended, with the phase-out now scheduled for 2021, the production glut was already scheduled. Because of this, spending on solar installations decreased in 2017.) Despite the overall decline, it wasn’t all bad news for the solar industry. Twenty-nine states and the District of Columbia saw their number of solar jobs increase.2

Then, in January 2018, the Trump Administration imposed new tariffs on imported solar modules (as I discussed back in March). While 2018 probably won’t be a banner year for the U.S. solar industry, some analysts now say the number of new jobs could exceed the 2016 record. The industry is still in growth mode, the solar tariffs weren’t quite as tedious as feared, and many developers hoarded panels in anticipation of the changes to the marketplace.[3]

Before the January 2018 tariffs decision, the Solar Energy Industries Association (SEIA) forecasted that 88,000 jobs would be lost or fail to materialize this year. But after the President opted for four-year tariffs that decline annually, SEIA revised its estimate to 23,000. The U.S. Bureau of Labor Statistics, meanwhile, has forecast that solar-photovoltaic installer will be the fastest-growing occupation from 2016-2026, outpacing health care, information technology, and other career tracks.[4] 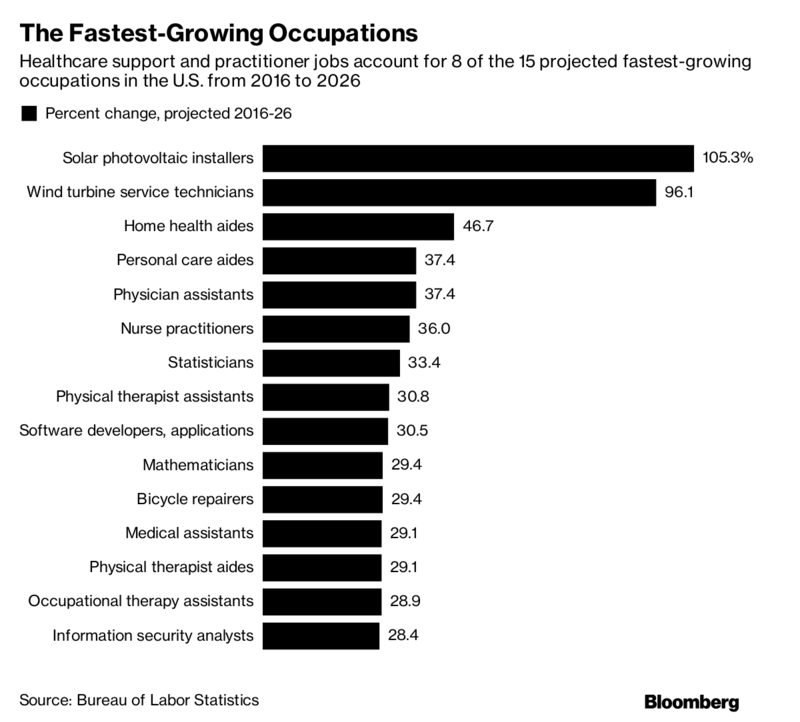 Considering all this, my advice to those considering a career in solar is this: don’t be discouraged! This is a burgeoning industry with massive potential. The growth in jobs this year may be lower than what it could have been without tariffs, but the industry will keep on ticking along and over the latest “speed bump” in the market.

I’ve been thinking a lot about solar jobs recently. Last month, I had the opportunity to learn firsthand about what it takes to construct a solar system by participating in a residential installation in rural Vermont. While I admit it was nice to escape DC’s heat and humidity for a week, this installation was no cakewalk. As a solar installer, you must have multiple skillsets including roofing, carpentry, and electrical engineering. And of course, safety is of foremost concern when electrical systems are involved, so you have to be methodical and cautious at every step in the process.

Here’s a brief chronology of installation, which took us several days to complete.

On Day 1, we arrived at the job site early in the morning. The racking system had already been installed by a local engineering crew. We quickly got to work unloading panels from a truck, lifting the panels onto the racking, and screwing them down into the racking with brackets and self-tapping screws.

We then connected power optimizers on the back sides of the solar array. Optimizers “condition” the direct-current (DC) electricity produced by the solar cells and send the energy to a central inverter that finishes the conversion process. The “conditioning” process fixes the voltage of the DC energy so that the central inverter can more efficiently convert it to alternating current (AC) electricity.

The array was located about 100 yards away from the house, so we had to pull all of the wiring through conduit and tie them appropriately into the inverter.

Finally, after ensuring we had followed adequate wire management procedures on the backside of the solar cells (you don’t want to leave behind a messy-looking system!), we were done. It was very gratifying to see the home’s electricity meter start to spin backward, indicating that the array was exporting power back to the grid.

I came away with a newfound respect and appreciation for the many skills needed to install a functional and safe solar array. I know we’re already on our way to a greener future where these types of jobs are plentiful and available to all people, and where skilled professionals are training the next cohort of solar installers.

A LEED Accredited Professional with nine years of green building and sustainability consulting in the federal sector, Dave brings a strong technical grounding in clean energy issues and data analysis as he focuses on deepening the impact of Groundswell’s work. Before coming to Groundswell, Dave played a leading role in developing sustainability plans for government agencies and increasing the resilience of federal buildings to the effects of climate change. Dave also served as a Technical Reviewer for a major World Resources Institute (WRI) report on greenhouse gas emissions accounting in the U.S. public sector. Outside of the office, Dave can be found onstage with The Washington Chorus and out on the field in local recreational soccer leagues. Dave grew up in Sturbridge, Massachusetts, and is a proud alum of Middlebury College in Vermont.