It should be a given that gender discrimination need to be fixed.

There is no reason whatsoever that gender matters in how someone opens a bank account, applies for a loan, or receives inheritance. (Remember how ludicrous it was that, as late as the 1920s, Mary Crawley couldn’t inherit Downton Abbey just because she was a woman, but any number of male relatives could!)

And yet many countries still have gender-unequal economic laws on the books, preventing or discouraging women from looking for work.

According to a new study by the International Monetary Fund (IMF), almost 90% of the 143 economies examined have at least one important, gender-based legal restriction.

That means that only 1/10th of countries consider men and women equal under the law.

And because the IMF’s focus is money and financial stability, the institution has already quantified the economic growth that countries could gain if they encouraged more women to join the workforce. For example, even in a highly developed economy like Japan’s, increasing women’s participation in the labor force could permanently increase GDP per capita by 4 percent.

It bothers me that the negative impacts of restrictive gender policies need to be monetized before it gets the attention of policymakers. Shouldn’t equal rights be a fundamental policy, not just a talking point? But in a world of competing agendas and limited budgets, it’s clear how this happens.

Here are the takeaways from the IMF’s study:

1. There’s been progress over time, but we can do better:

Between 1960 and 2010, 280 changes were made worldwide to make laws more gender equitable. A few examples:

o   In 2001, married women in Turkey were no longer required to seek their husbands’ permission to work. South Africa and Guatemala passed similar legislation in 1998.

o   In 2004, Mozambique relaxed restrictions on married women opening a bank account; Lesotho did the same in 2006.

o   The number of gender-based legal restrictions is highest in the Middle East, Northern Africa, Sub-Saharan Africa and South Asia.

An increase in equal rights around property ownership and labor costs means that more women can choose to work. How’s that for an economic boost?

3. Gender equality under the law doesn’t mean that men lose out.

More women joining the workforce has not led to men losing their jobs. This is huge, because it debunks the idea that gender equality is a zero-sum game.

And while equitable laws are fundamental, we can’t stop there. Many countries have laws that are fair in theory but less so in practice. There are no legal gender restrictions when running for US Congress or interviewing to be a CEO, for instance, but women make up just about 20% of seats in the Senate and House, and less than 5% of CEOs at S&P 500 companies. 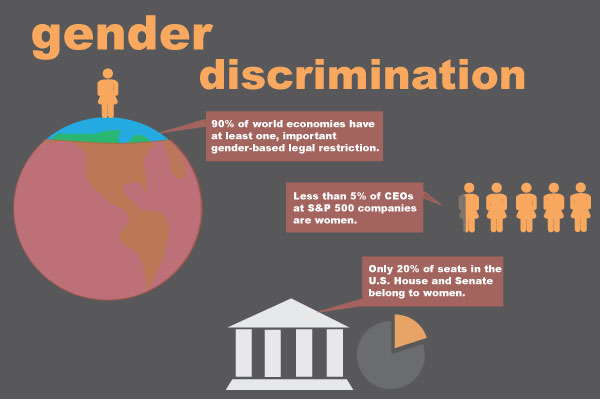 And while the U.S. has made progress on laws prohibiting gender identity discrimination, we’re not there yet.

These are big issues, but there are everyday ways to stand for gender equality in the workplace and economic sphere:

1. Learn about gender differences and share what you find out.

Check out the World Bank’s dataset on Women, Business and the Law. It’s the basis for the IMF’s study, and you don’t have to love spreadsheets to find information that’ll shock you.

Consider that, in 10 countries, women are required by law to obey their husbands. Tell me that doesn’t deserve a vocal tweet in light of Women’s History Month!

If you haven’t already, take a look at Kathleen Davis’ “5 Practical Things Men Can Do for Gender Equality at Work.” In there, you’ll find advice for all genders about supporting corporate policies—and for supporting your partner, if you have one—in direct, everyday ways.

Have a couple minutes? Take this Gender Equality Principles self-assessment. Then talk to your employer’s Human Resources office about taking the test company-wide, or starting a discussion on any relevant issues.

4. Support companies that are strongly committed to gender equality

The Economic Dividends for Gender Equality (EDGE) certification program approves products and companies that have demonstrated real support for gender equality. Admittedly, there aren’t very many yet, but big brands such as L’Oreal and IKEA take top spots.

Katherine Manchester is an international development professional, with roots in Maine and Tanzania. She has written about issues of environmental sustainability and gender. For fun, she enjoys reading and messing around in sailboats.
Groundswell